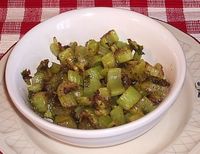 "Kay was reading Letters of a Loyalist Lady Being the Letters of Anne Hulton, sister of Henry Hulton, Commissioner of Customs at Boston, 1767-1776 (Harvard University Press, 1927). What a fascinating read! And only 750 copies printed. . . . "'We put in the Green house last fall 500 heads of the finest Celery that ever was seen here.'"

There appear to be some seven people in the household and no evidence so far of their selling or bartering any of their crops, so what do you think was done with 500 heads of celery? It seems a large amount IMHO. I understand that celery would be a much-used item (somewhere I have a receipt for braised celery of the period), but it still seems like a lot." Message #6689 from 18thC Woman's list.

French gardeners found that much of the too-strong flavor of celery could be eliminated, making the stalks better for salad use and not just medicine, by growing the plants in late summer and fall, then keeping them into the winter. In winter, fried celery makes a great accompaniment to game dishes, making use of sometimes withered stalks.

Here is a recipe for celery in oil with pepper from La Varenne's The French Cook, p.183.

"19. Celeris It is eaten with pepper and salt, or with oile, pepper, and salt."

Slice the tops and stalks of celery in about 1/2 inch slices and fry in a good oil or oil and butter until lightly carmelized. Season with salt and freshly cracked pepper. Serve with game dishes as a side vegetable

Email ThisBlogThis!Share to TwitterShare to FacebookShare to Pinterest
Labels: L'Entrée

I do love cooked celery and never really thought about cooking it as a dish all it's own but may try that. With a little onion.