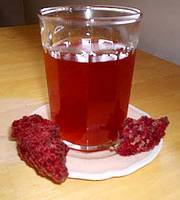 The snow clouds are gathering off to the north, but the day is sunny and cold. It's time to gather sumac before migrating flocks of cardinals and waxwings eat them all. Staghorn sumac grows all over the rocky knoll where I live overlooking Lake Huron--unlike other plants, it likes the dry, sandy soil. Sumac is also known as the vinegar tree and a European variety is widely used in Mediterranean cuisine, both as a garnish and a ground spice.

Native Americans and early settlers to America used sumac for medicinal purposes, but today I will gather it to make a refreshingly tart drink, not unlike a pink lemonade. I will dry some, hanging it from the eaves for later consumption, either as a drink, or to add piquancy to my cooking.

To make a drink, you can either soak it overnight in cool water for a light taste, or bring it to a boil and steep it to obtain a stronger solution. Then it must be strained through cheesecloth or a strainer to remove the hairs and stray berries. Add sugar to taste for a drink, or bottle some to use as you would vinegar. À votre santé!