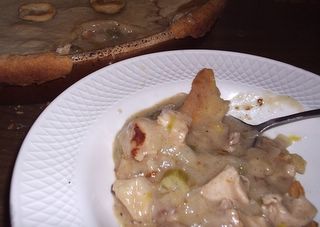 Translation:
Line your pie dish with pastry; put your quartered chickens in, season with salt, pepper, nutmeg, mushrooms & morels, crushed, fried bacon and sweet herbs: cover it with calf and sections of bacon, and cover it with an uppercrust, and bake it in the oven; after it’s cooked, uncover it, and remove the bacon bards, calf sections, and degrease it; put a white sauce in. The manner of making the white sauce is marked with the letter C. See that your pastry is of a good taste, and serve hot for Entrée


Adaptation:
A Chicken Pie with cream
As soon as the pastry [undercrust] is in your pie dish, put your chickens into it in quarters [I used cubed chicken breast], seasoned with pepper, salt, nutmeg, cinnamon, and fines herbs [I used celery and onions. I fried the onions and celery in a little butter and olive oil and added the fresh cubed chicken breast and sautéed it until the vegetables were translucent and the chicken was white and mostly done. I then added one cup of milk and 1/3 cup of flour stirred together and cooked it until a white sauce came together. Next I poured the filling in to pastry lined pie dish] and covered it with an uppercrust of the same paste. [Most pies of this type had vent holes in the upper crust with applied circles of pastry, which when baked, make it possible to add liquids {aspic, cream, mushroom juice, etc.}] When it is baked, pour in some cream and let it stand a little while longer in the oven. Lastly, add some mushroom juice and serve it up hot to table.

Comment:
The nutmeg and cinnamon is not a flavor we associate with chicken today; however, it is delicious and would make a very tasty “hot dish” to share at impromptu dinners where one is asked to bring a dish. This is one place to use all of the green veggie leftovers [I think carrot or squash would overpower this dish] or fresh green herbs—green onions, chives, celery, artichokes, etc.

I will make this dish again; my husband was pleased with the complexity of flavors. Enjoy!
Posted by Carolyn at 6:14 PM