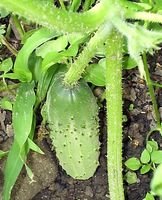 Take the best sort of cucumbers, that are not too ripe, and set them in good order in a pail, earthen pan, or some other vessel, in which is put an equal quantity of water and vinegar, with some salt; so as they may be thoroughly steept: they must be well cover’d, and not touch’d for the space of a whole month. Thus when cucumbers are out of season, these may be us’d, after they have been well par’d and soak’d. If you would garnish potages with them, they must be scalded; also when they are us’d for filets, as well on day of abstinence as on flesh-days, they must be cut after the usual manner, and dress’d, as if they were fresh. Indeed they will be of great use through-out the whole Winter, and during the time of Lent. To those that are to be eaten in a sallet, some pepper is usually added, with some handfuls of salt, and they may be stuck with cloves, at least one for every cucumber. They are commonly call’d girkins or pickled cucumbers; and to this purpose, the lesser sort is to be chosen, such as grow in the latter season. They are generally pickled with the stalk or leaves of purslane, and more especially with samphire, which serves instead of sweet herbs for that sort of sallet.

These cucumbers are Parisian Pickling from Baker Creek Rare Seeds. They are the crunchiest, crispest non-bitter cucumbers I have ever eaten!
Posted by Carolyn at 7:43 PM