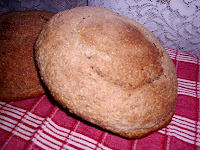 
Take a one pound lump of dough from a previous baking of white bread, known as a chef, and put it in a bowl with 2 cups of warm water [this chef contributes the sourness that we associate with rye bread]. Squish the dough ball between your fingers until mostly dissolved in the water. Add 1 package of yeast, 1 tablespoon salt, 4 cups stone ground rye flour; stir with a heavy wooden spoon until the dough is no longer sticky. Be patient--it will take quite a few turns of the spoon. Sprinkle one hand full of white flour onto bread board and dump rye dough onto the board; knead the white flour in and pat the dough into a round ball. Place in a greased bowl, cover and let rise until double in bulk.

When double, punch down and allow to rise again.

Shape dough into two flattened disks. Place on baking sheet or pan which has been greased and sprinkled with cornmeal. Cover. Allow to double in bulk once more.

Slash a circle on the middle of each loaf.

Cook's Note: As you can see from the picture, I did not have a razor blade or baker's lame (razor blade in a tool). I used a knife tip to slash a circle in my bread top after it had risen and just as it went into the oven [this caused it to deflate and didn't give it a chance to raise again]. I think I would have been better off to slash it when first shaped for the last rising--this would have allowed the circle on top to raise somewhat independently--and I think the loaf would have been prettier and would have looked more like the original loaves.

Rye bread is better eaten the next day and the day after that … The flavor increases with age. This bread is amazing!

Recipe: The Breads of France and how to bake them in your own kitchen, Bernard Clayton, Jr.
Posted by Carolyn at 8:29 PM