Bread for Sop or Soup 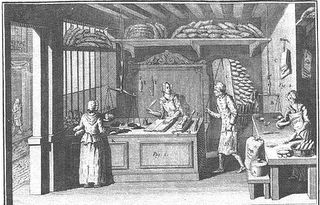 “‘Soup, in fact, derives from ‘sop’ or ‘sup,’ meaning the slice of bread on which broth was poured. Until bread was invented, the only kind of thick soup was a concoction of grains, or of plants or meat cooked in a pot. Gruel or porridge was thus a basic food, a staple form of nourishment, and long held that place in Western countries, for in practice bread was a luxury eaten only in towns.’” p. 177

“‘. . . soup which was to become a staple item of the European diet from the Dark Ages onwards: a slice of bread at the bottom of a bowl, with broth or soup made in a pot poured on to it. The word suppa, from Frankish, was used in Low Latin and has kept its original sense in Dutch sopen, to soak, cognate with English ‘sop.’ Soup poured over pieces of bread is popular in France: garbure, made of cabbage, bacon and preserved goose is one such example, so is French onion soup.’” p. 229. Quotations from History of Food, Toussaint-Samat, Maguelonne, translated by Anthea Bell. . Blackwell Publishers, 1992.