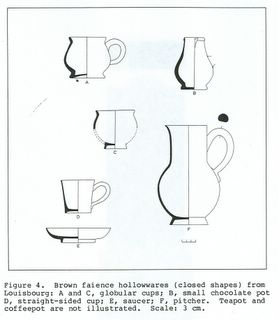 The following is my paraphrased summary of pouring pots from thesis: Blanchette, Jean-Francois (Ph.D.: Anthropology, 1979, Brown University) Title: The role of artifacts in the study of foodways in New France, 1720-1760 : two case studies based on the analysis of ceramic artifacts.

The pitcher is a pot with a slight pouring lid and a handle. Its neck is long, straight and vertical; its body is globular.

The coffeepot is a pouring pot in which the walls are uniform and slanted toward the bottom and the handle is horizontal and straight “used for heating all type of beverages” (Encyclopédie 1765: Fayancerie, PL I: 4) The author does not make a distinction between the coffeepot,

and the coquemart [Fig. 6] (see text of the encyclopedia). Furetière 1970, however, says that the “coffee pot” is a “small coquemart-shaped vessel in which coffee is prepared.”

The teapot is a pouring pot with a bulbous body, narrow opening and long cylindrical and sometimes curved spout.

It has a handle, and the spout is separate from the pot’s opening. The teapot usually stands lower than other pots of normal size. In the Recueil de plances (1765 in Encyclopédie: Fayancerie I:7), it states “A tea pot to be used with a tray (name given to a platter carrying a number of coffee cups), usually made to contain coffee.” 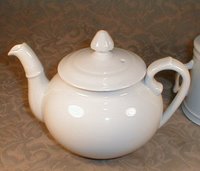 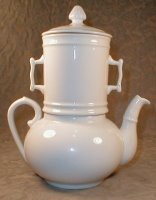 This text is probably another indication that tea was not widely used.

It is only in the text of the Encyclopédie itself that the teapot is described as a pot to be used for tea: “Tea pot (Faïence manufacturer’s terminology), slightly bulbous vessel with handle and spout, in which tea is brewed with boiling water and used as a beverage. Tea pots come in all shapes and sizes, and may hold from one to ten cups; Chinese and Japanese tea pots are perhaps among the most beautiful."

From these texts, it would appear that the function of the pouring pot(s) must have varied according to the needs of the people."
This post links to Feathered Nest Friday