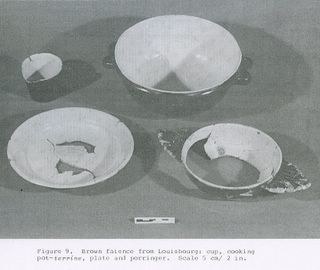 The following is my paraphrased summary of porringers from thesis: Blanchette, Jean-Francois (Ph.D.: Anthropology, 1979, Brown University) Title: The role of artifacts in the study of foodways in New France, 1720-1760 : two case studies based on the analysis of ceramic artifacts.

“Porringers are: hollow bowls with steep walls; a table utensil; small rimless platter normally used for serving bouillon, or preparing soup for a particular person; vessels for individual consumption. The porringers found in Louisbourg have two long shell-shaped handles and a vertical footring.

Because porringers are considered to be a “wet dish” service item, Blanchette emphasizes the porringer, which in certain areas of France such as La Marche, Le Limousin and Le Maconnais, had a distinct personal character. In these regions, a porringer was bestowed upon each newborn infant to be used solely by that individual until death. When the person died, the porringer was buried alongside the body as a funeral offering. This is a material manifestation of the personality.

[Today, babies often receive silver porringers with their name engraved.] In the Compagnie franches de la marine stationed at Fort Beauséjour, the brown faïence porringer may have been the symbol of each officer’s individuality, and this aspect would merit examination, along with porringers of other materials. Although Place Royale is the same type of site as Louisbourg, the same shapes of brown faïence are found there with the exceptions of the teapot, the pâté, the small pouring pot and the porringer. The lack of the brown faïence porringer is quite surprising since this was a common shape elsewhere in New France; however, coarse earthenware porringers are found there and may have served the same function. Another point in support in our explanation of the sociotechnic functions of the porringer is the almost total absence of porringers in the public areas such as inns and cabarets in Louisbourg.

It is also noteworthy that military sites revealed only those brown faience shapes relating to liquids and hot wet dishes. This is certainly related to the food customs of military officers at the time, whose main dishes were soup, porridge, stews, bread and beverages. It is believed that these faïence objects were used by the officers. Subalterns to the officers used coarse earthenware, metal, or wooden objects, or ate directly from the cooking pot or a common bowl [trencher].”