Have you ever started slicing or chopping vegetables or meat and find your knife won't even cut soft butter? Here is a tip for you.

Turn over a plate or cup and whet your knife along the edge of the bottom where the glaze is missing. Fired porcelaine or pottery makes as fine a whet stone as the most expensive ceramic stones available today.

First stroke your knife on one side, then the other--from haft to tip--until you achieve an appropriate edge. But be careful! Your knife will now be very sharp!
Posted by Carolyn at 4:51 PM No comments: 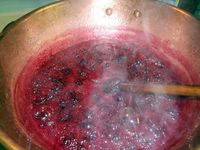 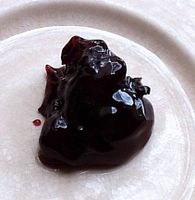 Pucker Up with Citrus! is this month's Sugar High Friday, originated by Jennifer and hosted this month by Alice. And pucker up was just what I did when I first saw a picture of Shaker Lemon Pie. Now I had grown up with images of lemon pie as being only lemon meringue. As I got older I tried lemon tarts, curd and chiffon pie, but I could just not imagine eating, let alone making a pie filling of lemon slices. Today's SHF presented the perfect opportunity.

The key to this pie is slicing the lemons paper thin and leaving them to macerate overnight with the sugar, not just several hours. You will find the recipe for this pie here. In addition, use your favorite two-crust pie crust recipe and get ready for an old-fashioned taste treat.

A slice of lemon pie--tart and sweet with an incredibly light taste of lemon--do give it a try.
Posted by Carolyn at 4:31 PM No comments:

Can you imagine towing a cow aboard ship in Normandy as you set sail for Nouvelle France, and then once you arrive, traveling on into the interior of the country, either up the Mississippi to Pays Illinois or overland via river and lake from the St. Lawrence? This is exactly what our ancestors did over several generations. When Marie-Rouensa died in 1725 in the village of Kaskaskia in the Pays Illinois her inventory revealed that she had 6 beefs, four cows and two heifers. Maps from Cahokia, also Pays Illinois, show house lots with gardens and stables and barns surrounded by strong pickets. Each household was mostly self-sufficient with its own cow(s), pigs, chickens, doves, orchards and potagers, in addition to the grains and hay grown in the longlots.

These sturdy cows from Normandy developed into the vache Canadienne, a breed known for its quantity of milk in relation to its size and browsing-grazing conditions. Thankfully vache Canadienne is again making a comeback due to its docility and lean meat.

Posted by Carolyn at 6:00 AM No comments:

Here is my recipe for rice with milk well sugared from La Varenne's Cuisinier françois, 1653.

Make a caramel of 1/2 cup sugar and 1 tablespoon of water. Cook until a medium, rich brown. Remove from the heat and stir in 2 more tablespoons of water (be careful! It splashes). Pour the caramel into a mold and swirl the caramel to cover the bottom and sides of the mold. Set aside to cool.

Cover 1 1/4 cups of rice with cold water and bring to a boil. Remove and drain rice. Bring 1 1/2 quarts of milk to a boil with one vanilla bean. Add rice and simmer gently for 35 minutes or until the milk is mostly absorbed. Remove the vanilla bean.

Whisk 9 egg yolks and 1 1/4 cups sugar until thick and lemon colored; then stir into the rice and milk. Pour rice mixture into caramel-lined mold and set mold in a baking pan with an inch of water. Bake in a moderate oven until a straw inserted in the middle of the pudding comes out clean. Allow to cool slightly, then turn out onto a plate with a rim. Chill. Serve with cream or custard sauce.
Posted by Carolyn at 2:19 PM No comments:

This foreign film is subtitled in English but that does not detract from the wonder of this movie. I really enjoyed seeing the austere kitchen before Babette arrived and the wonders she was able to produce in what, by modern standards, were very primitive conditions. I see her wood stove and I long for that modern convenience compared to my fireplace, grates and crane. This movie shows what wonders a meal prepared with love can do.

"Some movies can only be described as delicious. In Babette's Feast, a woman flees the French civil war and lands in a small seacoast village in Denmark, where she comes to work for two spinsters, devout daughters of a puritan minister. After many years, Babette unexpectedly wins a lottery, and decides to create a real French dinner--which leads the sisters to fear for their souls. Joining them for the meal will be a Danish general who, as a young soldier, courted one of the sisters, but she turned him away because of her religion. The village elders all resolve not to enjoy the meal, but can their moral fiber resist the sensual pleasure of Babette's cooking?

"The meal itself is the center of the film, and during that meal all the threads of the film are richly woven together. The pious sisters and their community finally learn the true depths of faith - something which is more than just what we believe, but rather also reflects what we do and the love with which we do it.

"Babette's Feast deservedly won the 1987 Academy Award for Best Foreign Language Film. This lovely movie is impeccably simple, yet its slender narrative contains a wealth of humor, melancholy, and hope." amazon.com reviews
Posted by Carolyn at 9:41 AM No comments:

Email ThisBlogThis!Share to TwitterShare to FacebookShare to Pinterest
Labels: About, History

McAuliflower recently commented about my Biscuits de Chocolat being a vehicle to include some ground nuts so I was inspired by this recipe for my final dessert during Days of Unleavened Bread.

Pound 1 pound of shelled walnuts in a mortar with a small part of 1 cup of sugar, but not into a paste. Separate 6 eggs and beat the yolks and another part of that 1 cup of sugar until they are light and lemon colored. Stir 3 Tablespoons of orange juice, some grated orange zest and 3 Tablespoons of flour (potato flour if keeping Kosher) into the yolks. Fold in the ground walnuts and 6 egg whites stiffly beaten with the remainder of that 1 cup of sugar. Pour into a greased cake pan and bake in a moderate oven (350ºF) until a broom straw inserted into the middle comes out clean. Cool in the pan and pour a syrup boiled and cooled of 1 cup sugar, 1/4 cup orange juice and 1/2 cup water over cake. Set in a cool place for 4 hours or overnight. Serve with fresh fruit.

You can find other recipes for Unleavend Bread and Desserts here.
Posted by Carolyn at 8:37 PM No comments: