Total immersion, ten days of living history to mark the tenth anniversary of a dedicated band of reenactors in a truly magical place, Louisbourg. Cooking, dancing, fishing, praying - you name it - they did it. Enjoy the photos and relive with them an 18thC colonial seaport.
Posted by Carolyn at 11:05 AM No comments:

My order is in--I'm just waiting for the boat to arrive with provisions. I will be perfecting my technique by comparing modern instructions with 18thC recipes using the following books: Mastering the Art of French Pastry, by Healy and Bugat and Nouvelle Instruction pour Les Confitures by Massialot.
Posted by Carolyn at 1:57 PM No comments:

«For Swiss Meringue, egg whites and sugar are combined at the outset and whipped over low heat. … Swiss merignue is much heavier than French and Italian merignues. At one time it was considered quite versatile, and some chefs preferred it over French and Italian meringues for many purposes because it is very stable.» The Art of the Cake, Bruce Healy and Paul Bugat. William-Morrow, NYC, NY, 1999, p. 173.

The beginnings of Swiss meringue can be found in François Massialot's Le Cuisinier Roïal et Bourgeois, 1691, translated in The Court and Country Cook in 1702, p. 103.

Dry Meringues
Having caus'd the Whites of four new-laid Eggs to be whipt, as before, till they rise up to a Snow, let four Spoonfuls of very dry Powder-sugar, be put into it, and well temper'd with a Spoon: Then let all be set over a gentle Fire, to be dried a little at two several times, and add some Pistachoes, that are pounded and dried a lttle in the Stove. Afterwards, they are pounded and dried a little in the Stove. Afterwards, they are to be dress'd as the others, and bak'd in the Oven somewhate leisurely, with a little Fire underneath, and more on the top: When they are sufficiently done, and very dry, let they be taken out, and cut with a Knife: Lastly, as soon as they are somewhat cold, let them be laid upon Paper, and set into the Stove to be kept dry.
Posted by Carolyn at 9:20 PM No comments:

This month the theme is bread with curd. With curd I mean the dairy product obtained by curdling milk with rennet or an edible acidic substance such as lemon juice or vinegar. You don't need to make curd yourself, but you are invited to do so, if you like. Otherwise just buy it. You can use curd, cottage cheese, quark and paneer and the bread can be sweet or savory.

How to participate: •Bake a yeasted bread with curd.
•Post about it on your blog with a link back to this post.
•Fill in the submission form below and your post will be listed in the roundup.
•Please only one entry per blog.
•Your post can be written in English, German, Spanish, French, Italian. All other languages please translate to one of these languages.
•Last day of submission is June 1st, 2011.
Posted by Carolyn at 10:04 AM No comments:

Email ThisBlogThis!Share to TwitterShare to FacebookShare to Pinterest
Labels: baking with curds, BBD#40 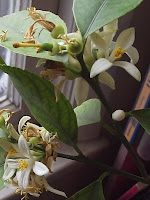 It's been a dreary Winter. The calendar says it's now Spring. I've been busy hand-pollinating my lemon tree and it appears I shall be rewarded with some lemons one of these Spring days.
Posted by Carolyn at 2:11 PM No comments: 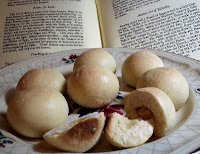 Another manner of Biscotins
Take a half-pound of sugar; cook it to the feather stage. Once cooked, remove it from the fire, & weigh three-quarters [pound] of flour which you will put inside your sugar syrup, reserve some flour that you will keep to handle it on the table. Having put your flour in your syrup, you will stir it well with a spoon: when your paste is well done [all your syrup has been absorbed into the flour], take it from the stove, & put it onto a clean table [marble pastry board], where you will have strewn a little flour before; it is necessary to stir it up; at the same time you will pour out your paste, & make small balls about one inch: you must work quickly; because when the paste is cold, one cannot work with it anymore: when the balls are formed, cook in the oven without paper; on copper sheets. When they are cooked, take out of the oven, & put them in a paper cone at the drying oven.

Another manner.
You will take a pound & half wholewheat flour: cook twenty ounces of sugar to the small feather; you will pour it in a mortar; let it cool & afterwards put in the flour, six fresh eggs & a spoonful of orange flower water; pound the whole together one quarter-of-an-hour, & pour out of the mortar onto a clean table, & roll the aforementioned paste in rolls, as large as a hazel nut, & cook in an oven until hot [cooked through or set] and sweet-smelling. Here is a recipe with proportions of ingredients. These biscotins also enclose a hazelnut, or you could use a whole almond. The orange flower water makes a delightful taste and smell--even better the next day. But be warned! These are very hard on the teeth--dunk them in expresso or mocha to soften them. Enjoy!