Chocolat - From Bean to Confection

Chocolate is dry paste, made with cocoa beans, & sugar, to which vanilla or an infinity of ingredients that the inventive Americans add. One makes and stores tablettes [of prepared chocolate] in the [pantry]; one drinks it; one employs it to make creams. The chocolate cannot succeed, if one did not choose mature cocoa pods; the best known pods are of gall color [ripe and brown; inside the pod are beans both brown color & dark crimson; those which are red are not worth anything: they are the hard & bitter chocolate; but the quality of the cocoa will only be known after it is roasted; because then it is seen whether there are many of these red grains]. It is necessary that the cocoa is roasted in order to find the taste & the color of chocolate you desire.

To roast the chocolate to the appropriate color, put it [chocolate beans removed from the pulp] in a pan of copper or iron, or in an unglazed terracotta pot, and put it on the fire & stir it up constantly until it is black on the outside, like roasted chestnuts; for this first time, one cannot brown too much; then the cocoa should be peeled, & winnowed well [to remove the outsides of the seeds]; to see if it is roasted enough, it is best to make a test of it; take one ounce of cocoa, & an half-ounce of sugar, which you reduce to a paste to better distinguish the taste &amp;amp; the color; because if it is not brown enough, & if it does not feel roasted enough, one shouldn’t fear to roast it once again, but carefully, because once its bark is removed, it is burned easily; & takes a malicious taste.

When one reaches the proper color, smell and taste, one crushes it with the mortar, so that it is a rather tiny grained masse when some is put on a plate. When the paste of the chocolate approaches this fine grain, it is necessary to add to it vanilla*, & a little powdered cinnamon[or other spice and flavor]; the quantity depends on the will. The whole being mixed together, you add to it three quarters or a pound sugar, for a pound of cocoa; mix your sugar in well and put the mixture back into your mortar, and put it back in the mortar or put it on the stone [metate] or the iron pan heated below with a chafing dish or small fire; also get the roller [mano]: then reduce this compound powder until very fine, a paste will develop with pressure and heat; pass the roller above little-by-little, until it is fine when it does not crunch on the teeth; then tablettes of one ounce are formed, or rolls of a quarter or of half-pound.

*It is necessary to choose strong vanilla, not too dry, nor too fatty; because they are often mixed with oil of balsam [to preserve them], pare them to make sure they are good & fresh: they are very difficult to reduce to a powder; but after having cut them in small pieces with scissors, pulverize them & pass them by the sieve [before adding to the mortar].

An interesting dish--I suppose it would depend upon the shape of your loaf of bread and whether you had a casserole or skillet to fit it--an oval or round dish would seem to work best.


Casserole [Stuffed Bread]
Take a [loaf of] soft bread whose crust is browned [implied here is a tough, chewy well-colored crust], & cut off the very bottom of the loaf and remove the soft insides, & reserve the crust [shell]: then mince [chop not shred] roast chicken or a fattened poulet [female or hen], with another kind of cooked meat; heat it [meats] in the pan, with [a little] good gravy & good seasoning, as if it were to prepare minced meat [in other words, a dry mixture, not soupy]: once it is heated through, carefully spoon some into the breadcrust [shell] which you will have dried completely on the inside by placing it in an oven & continue to put a little of this mince, layered with some of the soft bread insides torn in pieces and also dried in the oven, & completely fill with this mince & small crusts, then close [cover] it with the same part that you have removed by slicing off the bottom of it to remove the crumb of it. Take then a pan which is not larger than your bread, put on the bottom bacon bards [a slice of fatty meat or very well butter or grease the pan], & then the bread on the side which it was stuffed [turn right side up so the top of the filled bread is now uppermost], simmer in this manner with good gravy, made so that it cooks slowly and does not simmer [boil] too much, so that it is all entire [bread crust or what is now a bread bowl within the pan] and does not come apart, keeping it well covered [with gravy]. A little before serving, pour it onto a [serving] dish or platter, remove the bards [if used], drain off any grease & cover [pour over] your bread [garnish the plate] with a good ragout of calf sweetbreads, artichoke bottoms, truffles & asparagus tips around, according to the season.

Casserole au fromage [Cheese Stuffed Bread]
It is prepared just as above, in the stuffed bread one puts a little grated Parmesan or other cheeses [layered with torn bits of bread instead of the minced meats]; & when the bread is cooked [in good gravy] & placed on its serving platter, one still powders [sprinkles over] it some of the same cheese of which one [stuffed it], & one makes him take a little color in the furnace [pass a red hot fire shovel over it or put it under the broiler], & when one is ready to serve, one puts the ragout around & one serves it warmly.

A delicious way of using up those broken bits and pieces derived from preparing your foie gras.

Boudin of foie gras. Finely cut a quarter pound of pig fat, chop a pound of foie gras & as much of flesh of capon, season the whole of fine herbes [tarragon, chervil, parsley & burnet or chives], salt, pepper, crushed cloves [nutmeg is an option], six raw egg yolks & two pints of cream, fill of the bowels of pig, sheep or lamb, & simmer your boudin in milk [can use aromatics to flavor milk {carrots, onions, bouquet garni}]: once cooked, drain and roast [in the oven] on paper [directly on the floor of the oven] with a moderate fire for fear they do not burst, or fry in a little lard or another grease [to give it an appetizing color], & serve warm. 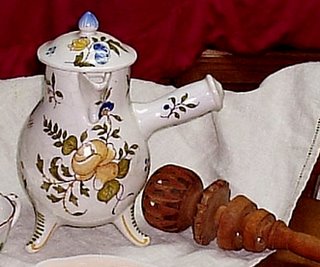 Michel Nichol's reproduction 18thC pottery.
Posted by Carolyn at 6:13 AM No comments: