the cooks next door

A visitor from New Orleans stopped by the other day and asked me some questions about my cooking references. He was preceded by a neighbor who also had questions about when I learned to like working in the kitchen.

Msr. Danno had these questions for me:

Number of Cookbooks I've owned: I can count 123 on the shelves in the common room and I have several by the bed. But that doesn’t count several books that fell overboard the canoe on the trip across the lake.

Last book that I bought: La Varenne's The French Cook, Englished in 1653

Previously Msr. Chefdoc had these questions for me.

What is your first memory of baking/cooking on your own? When I was six, I got caught in the pantry eating chocolat tablets—ma mère taught me to bake biscuits that very day.

Who had the most influence on your cooking? Peering into the pots and pans of LaVarenne and Massialot via their livres de cuisine.

Do you have an old photo as "evidence" of an early exposure to the culinary world and would you like to share it? Yes, a very old picture of my cuisiniere. 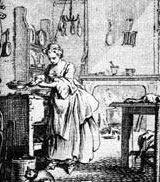 Mageiricophobia - do you suffer from any cooking phobia, a dish that makes your palms sweat? With good instructions or a mentor, there is nothing I am afraid to try cooking.

What would be your most valued or used kitchen gadgets and/or what was the biggest letdown? I couldn’t live without my mortar and pestle—such a wonderful food processor. My biggest letdown was a bundle of sticks tied and used to whip—it didn’t work well.

Name some funny or weird food combinations/dishes you really like - and probably no one else does! Bleu fromages and fruit.

You will probably never eat... Pork or shellfish

Added by Chefdoc of A Perfect Pear... Any signs that this passion is going slightly over the edge and may need intervention? My husband thinks so at times, but I’m sure he’s mistaken!
Posted by Carolyn at 4:50 PM No comments:

Email ThisBlogThis!Share to TwitterShare to FacebookShare to Pinterest
Labels: About, Cuisine 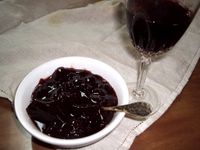 Glaze a roast with jam prior to putting on the spit. Use the wine to deglaze a pan to capture all those tantalizing juices for your sauces or as a refreshing hearty taste with artisanal cheese at the end of your meal. Grapes can be dried and later used by soaking in spirits to liven up great breads and sweets. Enjoy with me some of the oldest tastes of Canada.
Posted by Carolyn at 3:30 PM No comments: 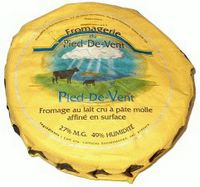 If you like Brie, you will like this cheese. As Derrick expressed, “ I'm always fascinated to read about these lesser-known breeds, especially when I hear they're making a comeback.” And I would like to encourage you to support this brand of cheese, Pied-deVent, which comes only from the Vache Canadienne.
Posted by Carolyn at 9:53 AM No comments:

For a truly Springtime dessert, layer vanilla custard in a parfait glass with stewed rhubarb and strawberry culis. In this case I’ve used the last little pot of strawberry preserves from last year’s harvest.
Posted by Carolyn at 12:02 AM No comments:

Buttermilk, honey, dates (medjul) and eggs are this month's Paper Chef competition. Unfortunately my illustration apparatus (digital camera) is on the fritz and I can only describe my entry.

I made a buttermilk and honey sorbet using this recipe from a friend named epicurious.

Just before the sorbet had finished curing in my ice cream machine, I beat an egg to a froth and put in a cup of kasha or buckwheat grains and dry-fried them in a hot dry skillet stirring the grain until it began to pop open. Then I poured on some boiling water and a pinch of salt, covered the skillet and set it at the back of the fire to cook and fluff the buckwheat. When the buckwheat was cooked and still crunchy, I mixed some with cut dates for a crunchy topping for my sorbet. The buckwheat adds an interesting crunch and flavor with the sometimes too-sweet taste of the dates but compliments the unique flavors of buttermilk and honey in the sorbet.
Posted by Carolyn at 11:59 PM No comments: