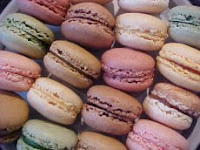 May is Mad for Macarons Month

Here is an 18thC recipe for macarons.
Peel & crush a pound of sweet almonds, add four egg whites & a pound of caster sugar [powdered or confectioners’], then mix the whole well together; you can add to it a little orange flower water [flavoring and/or coloring]; deposit your macaron batter on papers in ovals or longitudinally, leaving space between each, so that they are not touched: draw [dry for 15 minutes to develop a skin], powder with fine sugar & cook until they are firm: it is necessary that the heat of the furnace is soft, & that the hearth [sole plate—bottom of the oven] however is a little hot, in order to make it puff out: one can leave there macaroon until the furnace is cooled, then removed it from the paper & store in adry place.

Here is a super video on making macarons
Posted by Carolyn at 2:43 PM No comments:

Green Almonds Preserved. Choose almonds green and tender, slightly peel them, drill them with a big needle and put them in cold water. Blanche the fruit in boiling water, drain and rub between cloths to remove down; let them soak for 2 hours in cold water, which you will renew several times, drain again, put them in terrines, cover with boiling sugar syrup (25 degrees density) and a round of paper; drop in the cellar. Give eight ways with almonds, adding each time a little syrup and increasing by 2 degrees the density of syrup, which must be 6 to 37 degrees at the last way. Make sure sugar broth covers fruit at all times. Let them stand for twelve to fifteen days prior to the eighth way. Finish as for other fruits.

Green Almonds. Take green almonds preserved in brandy; being drained dip them one after another in sugar prepared au cassé (twelfth degree), and roll them in white nonpareils, or of any other color, or several colors mixed together, and dry them in the stove, or in a soft oven. They are also done after this manner—cut them into two or four pieces, put them on a baking-plate rubbed with oil, and pour some hot sugar caramelized over; turn them to do the same over again and keep them in a very dry place.

Green almond tarts. Pull the almonds from the tree before they shell, scrape off the down, and put them into a pan with cold spring water; then put them into a skillet with more spring water; set it on a slow fire, and let it remain till it simmers. Change the water twice, and let them remain in the last till tender, then take them out, and dry them well in a cloth. Make a syrup with double refined sugar, put them into it and let them simmer; do the same the next day, put them into a stone jar, and cover them very close, for if the least air comes to them they will turn black; the yellower they are before they are taken out of the water, the greener they will be after they are done. Put them into the crust, cover them with syrup, lay on the lid, and bake them in a moderate oven.
* * * * *
Recipes collected from friends and relatives
* * * * *

For true aficionados of green almonds, the prime moment is when the seed case has just begun to plump, the interior is still liquid, and there is no hint of a shell. The whole almond, including the green hull, is served chilled, sometimes in salted ice water, and eaten with a little salt.

In this recipe the green almonds are chopped and combined in a spiced mixture with dates and raisins to make a conserve. The intense almond taste contrasts well with the dense, rich background of the other ingredients. The conserve can be spread on buttered bread for teatime or spooned alongside grilled eggplant and peppers for a sweet-and-savory combination. It also makes a good filling for cookies.

Using a sharp knife, slice through the green almonds lengthwise, splitting the interior nut in half. Pick out the ivory nut halves with the knife tip and set aside. Do not be concerned if some of the nuts are still in the semi-liquid stage. Set aside 8 halves and coarsely chop the remainder. If you are using mature almonds, chop all of them.

Combine the raisins and the vinegar in a nonreactive saucepan and let stand for 10 minutes. Place over medium-low heat, bring to a simmer, and cook for 5 to 6 minutes. Add the sugar, dates, water, and cloves and cook for another 5 minutes. Then add the green or mature almonds and simmer for 2 to 3 minutes. The mixture will be rather thick and dense.

Remove from the heat and spoon into a hot, dry, sterilized jar with a lid. Tuck the reserved green almond halves along the walls of the jar, making a decorative band or arrangement. Cover with the lid.

Store in the refrigerator. The conserve will keep for up to 2 weeks.


Buy Green Almonds
Buy Preserved Almonds
Posted by Carolyn at 2:10 AM No comments:

I just received some mere de vinaigre--vinegar mother from a generous friend, some for white, rosé and red wine vinegar and I can hardly wait to try Christine's instructions over at holy basil. I'll keep you posted on the results.
Posted by Carolyn at 8:20 AM 1 comment:

A delicious spring green, similar in taste to asparagus, is houblon or hops, the shoots of which can be eated steamed, braised or fried. The male flowers can also be eaten in salads. The female cones are used later in the season to impart a certain bitter flavor to beer.
Posted by Carolyn at 10:18 AM No comments:

Of the Pastes of Fruits

It is only requisite to have recourse to the particular Marmelades, of every sort of Fruit, described in the fore-going Chapter, to know how to make as many Pastes; in regard that it is almost the same thing, and the whole Work is brought to Perfection by drying those Marmelades. To that purpose, when the Business requires dispatch, the Sugar must boil, till it be crack'd, or at least, greatly Feathered; to be incorporated with the dried Fruit. Afterwards, the Marmelade being made according to Art; may be taken up with a Spoon, and dress'd upon Slates, or in Moulds, in order to be dried in the Stove, with a good Fire. In the Evening, or the next Day, they must be turn'd on the other side, and laid again upon the same Slates, or upon Sieves: As soon as these Pastes are become very firm and compact, they are to be lock'd up in Boxes, and may be us'd, as Occasion requires.
At other times, when you would have any Paste dryed, let as much Marmelade, as you shall think fit, be put into a Copper-pan, and having caus'd some Sugar to be brought to its Feathered Quality, pour it in; tempering it well till it slips off from the bottom of the Pan; after the same manner, as in the making of Marmelade. Then let all simper together, for a while, and let the Paste be immediately dress'd upon Slates, or in Tin-moulds, made in form of a Heart, Square, Flower-de-luce, etc., which are usually set into the Stove, to be dried as before. These are the general Directions that me be given, for the ordering of such Fruit-pastes as are made of Marmelades; allowing two Pounds of Sugar, for every Pound of Fruit. But for other Pastes, that are made on purpose, an equal quantity of each will be sufficient, and the Sugar must be boil'd till it has attain'd to its Crack'd Quality.

New Instructions for Confectioners, faithfully translated out of French into English by J. K. A. J. Churchill, London, 1702, p. 81-82.
Posted by Carolyn at 4:55 PM No comments:

In this Month green Goose-berries first appear, of which Compotes and Jellies are made: They are also preserv'd liquid for the rest of the Year, either for Tarts, or to be serv'd up again in Compote, upon certain Occasions.

Green Apricocks come about the same time; affording Matter likewise for Compotes, Pastes and Marmelades: But they are chiefly preserv'd dry, and kept for a considerable time.

Green Almonds, which belong to the same Season, may be order'd after as many different manners, viz. for Compotes, Pastes and Marmelades, as well as preserv'd dry or liquid, in order to be us'd upon any emergent Occasion.

Straw-berries begin likewise to appear, which may be serv'd up, not only in their natural Condition, but also in Compotes, to diversifie the former Banquets.

New Instructions for Confectioners, faithfully translated out of French into English by J. K. A. J. Churchill, London, 1702, p. 11.
Posted by Carolyn at 3:43 PM No comments: