Echaudés and the Maillard Reaction

In my post on Echaudés - boiled pastry, I found that the recipe's instruction specifically say to use an unlined copper caldron or jam [confiture] pan to boil the pastries in. One of the interesting results of using a copper pan and heat would insure a reaction with the sugar in the dough to produce the Maillard reation, which will lead to browning once the dough is subjected to dry heat in an oven.

So when you next eat a pretzel or bagel or French echaudés, savor the flavor and the color of the outside of the pastry and be thankful for chemistry--otherwise, that bagel or pretzel or echaudés would remain as colorless as it was when removed from the boiling water of the previous step of preparation.
Posted by Carolyn at 7:32 PM No comments:

One of La Varenne's editions of The French Cook was translated into English in 1653, and over one hundered years later, the 10th edition of La Nouvelle Maison Rustique uses the same recipes, almost word for word to describe not only the ingredients, but the method of the previous century--it only adds another sweet variation and a second boiling, this time in oil or lard. Truly, nothing is new under the sun. And those of us in America are familiar with this boiled pastry technique, as well. Celebrate the past each time you eat your bagel and cream cheese.

Depending upon your region of France, your echaudés will have one of several appearances: Lyon, jeannots, craquelins and those with anise.

The method of making échaudéz [boiled or scalded pastry], or craquelins with butter.

Place a pint of flour on your table, make a small well in the middle, & put approximately a half glass of warm water mixed with beer yeast, & stir it together until a fine paste results which will become the leavening agent to incorporate into your échaudé pastry, which is why it will be necessary to allow this paste to rise [proof] in a warm place, so that it doubles in bulk, & if it is in Summer it can be inflated sufficiently in fifteen minutes.

While you are waiting for the leavening to proof, you will put on a table a quart of fine [pastry] flour, make a well in the middle and work in a pound of sweet butter, which is cold but not too hard, & mix in an ounce or a bit more of well-pounded salt, mix it altogether, adding what it will be necessary of cold water to mix this pastry [to the right consistency], & when your leaven has risen sufficiently, incorporate it into your butter pastry and work it well.

And when it is mixed sufficiently, you will roll it out and cut it into small triangles with a serrated roller [jagger or pastry wheel] which will then be stretched by hand to form echaudez.

It will be necessary to have a cauldron [copper confiture pan] full of boiling water where you will drop in your echaudez, & leave them until they resurface; & then you will take a skimmer with which you will turn your echaudez until they are done to the touch, & then you will remove them from the water, & will put them to cool and dry on a wire netting; then you will bake them in the oven: it takes about 15 minutes to bake small echaudez. But it is necessary that the furnace is hard, i.e. as hot as in cooking large pastries.

If echaudez do not take sufficient color while cooking, it will be necessary to do a little clear fire on the end, near the sides of the furnace, so that the higher will color them.

Notice well: if you do not put butter in your echaudez, & make them only with salt & water, you will have a common variety that most people know [pretzels or craquelins].

Echaudez with eggs in the pastry, it is made with a quart of flour & fifteen eggs, & you will use only one half pound of butter. Echaudez with eggs, must be carefully handled and is more delicate than that of the other echaudez. It still should be noted that one must bake in a slower oven echaudez with the eggs, than those which are only of salt & water, or with butter.

Echaudez glazed [with icing sugar]. Take echaudez made with eggs after they leave the water, let them drain & harden, then cut them in half between the two crusts, put to soak in milk with sugar, cover them & put them on hot ash during four or five hours to hold them warmly: it is not necessary that they boil, for fear they may disintegrate; then draw them from the milk & put them to drain [on a wire netting], then fry in new lard [I would use olive oil]: when fried & well coloured, draw them out with a skimmer, powder them with confectioner’s sugar, first on one side & then the other, & serve them warmly.
Posted by Carolyn at 8:33 PM No comments:

To preserve fruits entirely, one must replace the moisture in the fruit with a solution of sugar syrup or honey. This is accomplished by carefully peeling away the outer skins or rinds [citrus rinds have other preservation techniques, as well] and cooking slowly in several boilings of sugar syrup or honey, and allowing to stand over night in the solution in a non-reactive vessel in a cool place. At the beginning of each day the syrup is drained from the fruit and reboiled and the fruits are again added to the boiling liquid and allowed to cool in the syrup overnight. This is repeated until the fruits have absorbed most of the sugar. The shape and color of the fruit can be ameliorated to some degree by only boiling the syrup and pouring it over the fruit, allowing it to cool without actually boiling in the syrup--this preserves the texture of the fruit and is exemplified by what is known as glacéd fruit; indeed, almost any fruit can be preserved in this manner.
Posted by Carolyn at 7:55 AM No comments:

5 quarts of wine [can use, white, rosé, or a dry red]
5 Seville oranges [add one lemon, if not Seville]
Zests of your oranges [and lemon]
1 pound sugar
1 quart of brandy or Marc
Vanilla bean, optional

Slice oranges [plus optional lemon] after zesting [do not remove pith] and layer with sugar into a large glass jar with a lid. Gently pour in wine. You may add one vanilla bean, if desired. Dry zests for an hour in a slow oven and add to wine along with a quart of brandy or Marc. Cover and place in a dark cool place and macerate for 40 days or so. Every other day, gently shake or roll jar to help dissolve sugar. After 40 days, remove pulp and peels* and pour through a paper filter into clean bottles and cork and seal. Place again in a dark place. Wine will be ready to drink after 60 days. The longer you can resist opening, the better it will be.

*After my wine has macerated, I cook down removed orange solids with a little more sugar to taste, and make a jam that I use to deglaze the pan when cooking game and poultry.
Posted by Carolyn at 5:41 PM No comments: 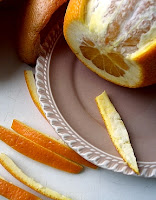 Winter is the time for citrus fruit, especially oranges. The golden fruit and juice are so sweet and remind me of summer tastes. At this time of year I am reminded how long it is 'til Spring, and I try to savor every possible remembrance. After I eat the fruit I candy the peel and dry some to use in herbal mixtures and to make vin d'orange.

Cut the top and bottom off the orange and set aside [use to dry and grate for seasoning]. Cut through the side of peel in three places, but not into the orange itself. Carefully lift off peel in three sections and turn pith side up. Use a spoon to scrape away as much pith as possible. Cut peels into strips about 3/8" wide. Place strips in pan and cover with water and bring to boil. 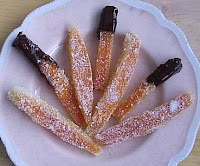 Oranges & Lemons.
Cut off ends of oranges, carefully raise the [peel], (save juice & pulp for salad or marmalade or citrusade. [this is most easily accomplished by cutting off ends of orange, removing peel in quarter section, then supreming the flesh from the sections]), remove seeds with a small steel spoon, & blanche peels in fresh boiling water, drain them & put in fresh water and sugar to cover, cook to the perle stage [220° F], drain oranges, cool syrup, reboil in sugar cooked until the feather [235°F], remove quickly from the fire, allow to rest a little in the hot syrup [they may absorb most of it], remove and drain oranges on straw mat, & let them dry a little, then roll in sugar to coat, allow to thoroughly dry: For 20-25 oranges [quarteron] one needs approximately six pounds sugar. [Save the sugar syrup, which may have crystallized, to use, dissolved in other preparations or as a flavoring in water for a refreshing drink].

Peel oranges the same as the others, cut them into quarters, remove the inside [flesh], & clean them [the white pith] with a knife, cut them into bands like lardoons [strips], boil in fresh water and sugar to barely cover, drain them, let cool, reheat sugar syrup and cook them again in the boiling syrup, & preserve them like the others, & roll in white sugar & dry them on the straw mats until hard like rocks.

Oranges by rings.
Peel oranges, & cut them by rounds of the thickness of a little finger, put them in fresh boiling water, drain them, hollow the inside of the rings, saving flesh for salad or marmelade, cook [peels] once more with water [and sugar], when cooked withdraw them & put them [again] in fresh water [and more sugar], & preserve them like whole oranges, & separate them, roll in sugar and dry them on a straw [mat] or rack.
***
Le Cuisinier François, François Pierre La Varenne. Chex Jacques Canier, Paris, 1680, p. 400-401.
Posted by Carolyn at 1:41 PM No comments:

January & February for the Confectioner

During these two months Sevil-Oranges, those of the Port[uguese], and others, are usually preserv'd Whole, in Quarters, or in Sticks: Pastes, Conserves and Marmelades, are also made of them; and their Peels are candy'd either in Zests, or in Faggots [sticks].

Lemmons, Cedres (citrus medica or citrons) and yellow Citrons (melons), are preserv'd after the same manner; and if the Provisions that were made of other sorts of preserved Fruits are now consum'd, that Defect may be reciprocally supply'd by these; the pleasant Variety of which will be very grateful, and give a great deal of satisfaction.

The court & country cook, faithfully translated out of French into English by J. K. A. J. Churchill, London, 1702, p. 10 New Instructions for Confectioners.
Posted by Carolyn at 11:55 PM No comments: