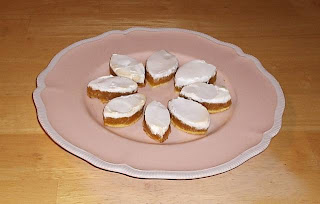 Calissons, a very old sweet, is usually only seen as a professionally manufactured candy, not a homemade treat and is a regular part of holidays and fêtes, especially le gros souper followed by treize (13) desserts. A mixture of 40% almonds and 60% fruit and syrup is sandwiched between a layer of wafer/host and a topping of royal icing and is then cut into an almond shape. The history of calissons began in1474 at the time of the marriage banquet of King Rene with Jeanne of Laval. A cook, secretly enamoured of the Queen, created calissons for her in Aix-en-Provence from crystallized almonds, melons, sugar, syrup and unleavened bread or host.
Since the latest supplies from France did not include my order of wafer/host, I had to devise some sort of crust to replace it. I used a mixture of 1 cup flour, 1/2 cup sugar, some grated lemon rind, 1 egg yolk (keep the white for the royal icing), 1/4 cup butter, and a drop of rum. I chilled the resulting dough and then patted it very thinly onto the bottom of a sheet pan and baked it in a hot oven (425ºF) for about 8 minutes, watching very carefully that it only set, but didn't brown.

As the crust was cooling, I finely chopped and then pounded in a mortar 6 ounces of blanched almonds and 2 ounces of sugar until I had a fine powder, but not a nut paste. I then added in 8 ounces of finely chopped crystallized melon and continued to pound to mix. Previously I had drained some orange marmelade to obtain 2 ounces of syrup, which I also pounded into the mix to help bind it. The marmelade syrup was important to add a certain bitterness because I did not have any bitter almonds. Soon, I had a finely mixed paste which I then put into a poêle over a slow fire and stirred constantly until it had "drawn" as much as possible (this means I watched until no moisture vapor rose from the gently cooking mass). Next I patted the paste over the crust with wet fingers, leveling it up as much as possible.

Royal icing came next by whipping the remaining egg white with 1 cup of finely powdered sugar, which was spread over the paste. It flowed into all of the cracks and made a smooth surface. Then I took two round cutters and cut circles out with the small one; then used the larger one to intersect the midpoint of the smaller circle, thereby cutting the small circle into two almond shaped pieces. I had two tasty little bits left over from each small circle, which disappeared quickly into the greedy mouths hanging around the kitchen. Then the calissons were placed onto a clean baking sheet and put into a slow oven (300ºF) to "draw" [dry out] the paste and to set the icing. And there you have it--calissons. But be sure and order your wafer paper early, in hopes that the last boat from France for the year will have a ready supply.

Errata: You can see in the picture that my royal icing has cracked and is no longer smooth. Alas, while cutting out the almond shapes, I could not help but disturb the appearance of my icing. I hoped that it would smooth out in the oven, but it did not. Next time, I will cut the shapes first and then pipe or drizzle the icing over the little individual shapes to maintain the desired smooth appearance.
Posted by Carolyn at 7:32 PM