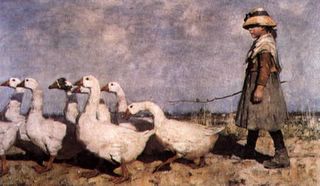 In my last post of fattening fowl for foie gras powdered nettles were mixed with flour to make a paste for cramming geese. Why green, you might ask? Because young geese will orient toward paticular greens, especially grasses, which is why they can me used as a management technique for weeding orchards and other crops. Care must taken to corral the geese away from other tender green crops and older geese from other colors, such as strawberries or tomatoes. Once they associate another color other than the green of new grass for food, they can literally mow down crops, even being known to eat the roots right down into the soil. Hence, it is necessary for our little goose girl to herd them away from the desireable crops, toward the water source several times a day and to allow them to rest in the shade. Once they are rested, they will defecate and return to feeding. As such geese are a natural part of sustainable agricultural care for fields.

Fresh, tender greens are very high in nutrients--proteins and others--and create a natural source of fat in geese. Prior to domestication, this fat was used for fuel storage for long migrations. In fattening fowl for foie gras, [dried] greens and flower or seed protein will also create natural fat, used today for Jews to render as schmaltz for cooking fat as beef tallow and lard are forbidden foods. The first mention in Europe of foie gras is from a discussion of Jewish law by Rashi in the 11th century. As early as 2500 BCE, Egyptians crammed geese.

Cramming is a natural feeding habit for a goose--geese will eat until they are so full in the craw that they can fall over forward and will still try to eat more. Offering them a green flour paste "finger" pellet of food would be a morsel they couldn't resist--even if they were stuffed already--cramming or gavage is not a cruel treatment but a goose's delight.

When geese are penned for the winter, and fresh greens are not available, the high carbohydrate pellets, green in appearance from the nettles, produce the excess fat and enlarged liver so sought after by gourmands. Butchering normally occured in time to produce the holiday goose before the bird lost weight and its precious fat. Birds selected for foie gras would have been crammed for two or more weeks following confinement. This cramming relies on the greed of the goose to ingest "greens" at a time when little fresh green vegetation is available--literally greed produces foie gras.
* * *
Enjoy Foie Gras, source for whole [entire] and canned [bloc] foie gras and other French treats.
* * *