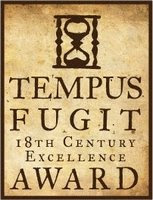 Chloe, the Widow Black of Slightly Obsessed, has lately granted 18thC Cuisine the Tempus Fugit Award. My thanks go out to her for both her support & for her continued blogging on various 18th century subjects.

"The TEMPUS FUGIT Award is given to writers & living historians whose journals represent the best aspects of the 18th Century. These writers aim to inform and entertain the public with tales from events, historic research & experiments and highlights from 18th Century arts and culture. It is the hope of TEMPUS FUGIT that this award will forge a web of friendship and knowledge that will aid in creating a tight community of reenactors and living historians on the internet and beyond. Winners of the TEMPUS FUGIT Award should pass this award along to six other 18th Century blogs that meet the above criteria, and include this text with the Award, as well as a link back to the TEMPUS FUGIT blog."

Here is a list of my nominations, which alas, seems somewhat short by comparison, due to so many already being named.

Culinary History Online: not a blog, per se, but an extensive onine resource for 18thC culinary arts

Les portraits au pastel du XVIIIe: JP has access to beautiful portraits from the 18th Century, many never seen by those of us on this side of the pond.
Posted by Carolyn at 3:02 PM