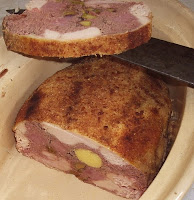 Galantine.
The nature of an Intermess of Galantine shall be hereafter explain'd in the Article of Suckling-Pigs, under the Letter P. and there also shall be shew'd the Manner of Garnishing it and Serving it up to Table: We shall only intimate here, that it may also be garnish'd with its Skin well breaded and brought to a fine colour, by means of the red-hot Fire-shovel; for the rest, the Reader is referr'd to the Place even now mentioned. P. 128. 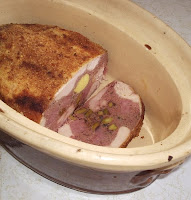 I have discovered that any fowl can be deboned and stuffed, then rolled and placed seam-side down in a close-fitting casserole dish and baked with its lid--this will approximate the Stew-pan named in the following recipe. Once the bird is baked [350°F 1 1/2 hours or so], remove the lid and place a weighted board on the top of the galantine and cool overnight. Sprinkle with bread crumbs and broil [red hot Fire-shovel]. Slice and serve.

The close-fitting casserole takes the place of the napkin and the broth in which modern galantines are normally poached. Although this recipe is for suckling pig and includes Gammon [Old French for jambon--ham] & Bacon, this works very well for stuffed poultry or game birds. I used ground beef [with a spoon of brandy, 1/4 teaspoon curing salt and a teaspoon of Menues Epice] along with an egg yolk, the strong herb liquor and cream pounded until smooth to Farce the chicken and strips of turkey ham along with harden'd Yolks and Pistachoes; otherwise the recipe is the same. I cannot believe how easy this dish is to prepare. There is even lots of gelatin surrounding the cooled galantine to serve in little cubes.

Here is a video of Jacques Pepin deboning a chicken.

An Intermess of a Suckling Pig in Galantine.
After having caus'd your Pig to be well scalded and drawn, cut off the Head and the four Legs: Then let the Skin be slipt off, beginning at the Belly; but care must be taken that it be not cut, especially on the Back: Let this Skin be neatly spread upon the Dresser, whilst a Farce is preparing, with the Flesh of the Pig, a piece of very tender Veal, a little raw Gammon, and Bacon; also, a little Parsly, chopt Chibbol, and all sorts of fine Herbs, except Rosemary and Sage. In the mean while, a Strong Liquor is to be made, with a Quart of Water, two Bay-leaves, some Thyme, sweet Basil, Savoury, three Cloves of Garlick, and two or three shalots; this Liquor when half boil'd away, will serve to moisten your Farce. Let some Pistachoes and Almonds be also scalded according to discretion, and let six Eggs be harden'd to get their Yolks: Afterwards let some of your Bacon and Gammon be cut into thick Slices, taking only the lean part of the Gammon: When they are all well season'd, let a slice of Gammon, another of Bacon; as also, a Lay[er] of Almonds, another of Pistachoes, and a third of hard Yolks be set in order. Besides, you must put into the Farce, some Truffles and Mushrooms cut small, with a little Milk-cream, and soak them in your strong Liquor, adding afterwards the Yolk of one Egg. The Bacon and the other Things being thus order'd, this Farce is to be spread over them, beginning at one of the ends of the Skin, and then roll'd up; drawing the two Swards on both Sides close together, so as the Farce my not fall out: When it is well roll'd up of a convenient length, let it be tied, or sow'd up on all Sides, and put into a Napkin; which must be bound at both Ends and in the middle, to keep it very firm and compact. At last, it must be bak'd in a Stew-pan between two Fires, viz. one upon the Lid and the other underneath, for the space of ten or twelve Hours, with some Slices of Bacon and Beef_stakes, both on the Bottom and Top of the Pan: Let your farced Pig cool in the same Pan, and as soon as it is taken out of the Napkin, let it be untied, and cut into Slices, which are to laid in a Dish, upon a clean Napkin, and so serv'd up cold, with Slices of Lemmon and Flowers. P. 191-2.

The court & country cook, faithfully translated out of French into English by J. K. A. J. Churchill, London, 1702.
Posted by Carolyn at 2:03 PM