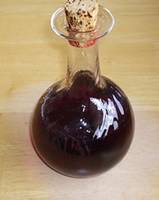 This evening I reached into the back of the cupboard and brought out the jar of raspberries I've had mascerating in white wine vinegar for several months. The raspberries have since become a mass of brownish pulp, but the vinegar has an intense color and a fresh raspberry smell. And the taste! It's like popping a fresh-picked berry into my mouth in the height of summer--tart, but full of flavor.

I strained the whole through two layers of cheesecloth and after the vinegar settled once more, I decanted it into a flacon with a new cork. I purposely steeped the fruit in the cool darkness of the cupboard, rather than in the windowsill, because I wanted to retain as much of the glorious color of the raspberries as possible. Using it to deglaze the pan after searing game will add just that extra something to the sauce and several tablespoons of vinegar and sugar to taste in cool water will make a refreshing drink. Here's to the memory of summer now past.

Email ThisBlogThis!Share to TwitterShare to FacebookShare to Pinterest
Labels: Condiments