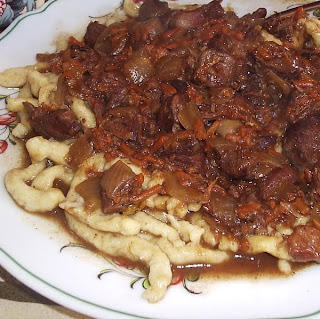 When I cleaned out my freezer today, I found one last package of venison--freezer-burned, and before my husband could find out, I also withdrew a package of fat, frozen from when we last made pickle [corned] beef. I chopped the fat into cubes, added a splash of oil to the marmite and began rendering the fat for flavor and moisture. After browning the venison very well, I deglazed the pan with vermouth, covered the meat with broth, added three bay-leaves off my laurel tree, 2 zests of lemon, several sprigs of fresh thyme, one small nutmeg grated, salt and pepper. When it had simmered for three hours, I added 2 cups of grated carrot and 1 large onion chopped. At the end of 30 minutes, I added 2 tablespoons of flour to the ragoo to thicken it and served it up on a bed of sainserelle from Le Cuisinier Gason [noodles similar to bigoli, passatelli or spätzle] made of parmesan and breadcrumbs bound with an egg cooked in boiling, salted water. He never knew.

Having larded a piece of Stags-flesh with thick slips of Bacon, season’d with Pepper and Salt, let it be fried in Lard: Then let it boil for the space of three or four Hours in an earthen Pan, with Broth or Water, and two Glasses of white Wine, season’d with Salt, Nutmeg, a Bunch of Herbs, three or four Bay-leaves, and a piece of green lemmon. When it is ready, let the Sauce be thicken’d with fried Flower, and add Capers and Lemmon-juice as it is serving up to Table.

what an interesting blog! love everything you have so far.

Marmite? The 'vile' substance put on toast that I soooo love?

Carolyn!!! I just got back blogging and thought I'd look up my friends from a few years ago! I miss our community! Glad you're still blogging. :-)