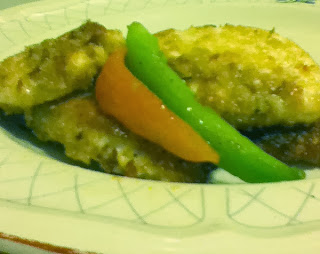 *SAINT MENEHOUT: The nomenclature indicated, as it still does in French cookery, something egg-and-breadcrumbed and then fried or broiled. A good number of Nott’s receipts, all of French derivation, call for this treatment. Sainte-Menehould is a small town in the Champagne district. Whether the method of cookery is called after the town or the saint herself is not recorded. (John Nott, 1726) https://prospectbooks.co.uk/glossary/s 11-18-2013
Posted by Carolyn at 7:13 PM

This dish sound most excellent!